NOTE: This is the history of Revolution’s development as a company and general design, for more detail on each kite model and it’s timeline, be sure to visit John Mitchell’s “Revolution Kite History” website… A longtime Rev enthusiast, he is one of the most knowledgeable fliers regarding the history of Rev.

The Revolution sport kite was released at the 1989 KTA Kite trade show in San Diego, California (our home town). The kite was in development for about two years prior to that.

The development of the Revolution design began in 1987. I had recently moved back to San Diego from Santa Barbara, California after completing a degree in mechanical engineering and working with an engineering firm there. While driving by the San Diego Bay one afternoon, I noticed a big husky guy flying a kite and being dragged across the park! I was so fascinated that I looked into this new sport. I soon found out that the best kites cost up in the range of $200 to $300. I quickly enlisted the fun loving company of my two brothers Jim and David. Within two weeks we had designed and built our own set of power dragging kites! For the next several weeks, we spent our afternoons experimenting with this new hobby of ours! After getting the basic controls of two line flying down, we flew team maneuvers, then we flew our delta kites with long flowing tails, then we stacked the kites, then we got kind of bored.

I’m always looking for ways to improve things, and it seemed to me this kite could use some improving! Primarily, better landing abilities! My idea was to modify the kite so that it could back down and land. Over the next several months we tested multiple approaches to effect a “backing down” or reversing action including four line control, three line control, appropriate handle design, and mechanical flap designs among other design concepts. Although the initial attempts quickly affected the general performance of the kite, the ability to reverse down and land was not much closer. As we worked harder and harder to fine tune the design, the effects were becoming less and less noticeable. After about six months of design modifications to the basic delta design, we gave up in frustration.

Several months later I woke up one morning with a completely new approach to the design problem. I decided to approach the kite from an airplane control perspective as opposed to a kite approach. By controlling each wing independently from a flap or aileron design we could redirect the air flow to cause forward or reverse flight. Within two weeks we had a working model that far surpassed our wildest dreams! Far beyond our main goal of being able to back down and land, this new revolutionary kite was capable of instantaneous stopping, reverse flight in any direction, full speed control in both forward and reverse flight, and propeller like spins! The most impressive fact was that these characteristics are inherent to the basic design and therefore do not take hours and hours to learn complicated techniques.

Although precise accurate control takes practice, backing down to land takes nothing more than a simple rotation of both wrists!

Since the initial design of the Revolution I had a nine-foot wingspan, structural integrity quickly became an issue. Fiberglass was too flexible and heavy. The high stiffness aluminum used in the arrow shaft industry works well but begins to bend to shape within an hour or so of flying. My younger brother David just happens to be a pro rated golfer with a lot of connections in the golf industry including access to the graphite shaft design team at Aldila, who at the time was the worlds’ leading graphite golf shaft manufacturer. Within six weeks or so we had designed the ideal shaft for our Rev I (Neos Omega) kite.

With eighty kites built and two days to go until the international kite trade show in San Diego, Aldila gave us the bad news that they wouldn’t be able to manufacture the shafts for us due to other production obligations.

The Revolution design was an instant show stopper at the convention, selling out in the first hour followed with orders for 400 more! We had a wall of people, three deep for three days placing orders.

On Saturday, the kite demonstration day, we had store retailers crowded around with three to six kites under their arms waiting for a lesson. With this information, they would be able to go back to their stores and amaze all their customers, therefore selling thousands of kites! ….. Wrong! We gave people the basic lesson, telling them, thumbs back flies the kite up, left thumb forward turns left, right thumb turns right. Both thumbs forward, backs the kite down. The fact that this method of flying was completely alien to them (no pulling motions), along with the highly sensitive controllability, made the Revolution overwhelming. Add the fact that we had virtually no experience teaching people to fly added to the confusion. It seemed so easy to us! Thumbs back. Left thumb, right thumb, thumbs forward!! The stores had demonstration videos showing performance, but no technique. Only hard-core enthusiasts would dare accept the Revolution challenge!

Rev ad from the early 90s 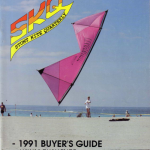 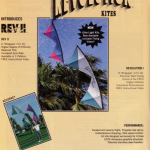 Rev ad from the early 90s

Although selling the kites complete with a training video was the original plan, it had been dropped due to advice from store retailers that the cost would be prohibitive. After a couple months of frustration from new Revolution fliers and retailers, we began including the training videos with each Revolution sold. We instantly noticed the difference! New fliers that used to take two weeks to get the basics would now buy the Revolution, watch the training video that night, and learn the basic flying skills by the next day! My brother Jim, over the next couple years was successful in incorporating quad line flying into the international competitions including precision, ballet and team events. From the beginning and through the present virtually all quad line events are dominated by the Revolution design.

The original Revolution I design is extremely stable and is the choice for large stacks but is considered slow by today’s standards. The Rev II is fast and somewhat “twitchy”. I enjoy it most in high winds (12 mph and above) on a 100-foot line set, which makes the flying fast and furious! Forget precision! The Rev 1.5 debuted in 1995 and is by far the favorite of both competition fliers and competitors alike. At a wingspan of 7.5 feet, it has great stability similar to the 9-foot Rev I with a lot of the instant quickness of the 6-foot Rev II. The Speed Series, which debuted in 1998, introduced a new aspect to the Revolution design. With the 4-strut support of the tighter sail, the Revolution Shockwave and Supersonic reach speeds to 70 mph! That’s twice the speed of a standard Rev 1.5! In fact, the Speed Series can fly faster backward than a 1.5 can fly forward!

In 2001 we introduced the Revolution Blast. With a wingspan of 9.5 feet and a longer chord, this design resulted in significant power and improved stability over the standard Speed Series design. Introduced in 2003 is the Super Blast. With approximately 30% more sail area than the Blast this is a true buggy kite in winds above 12 mph. The up wind performance is unbelievable! One of the greatest advantages of all the Speed Series kites is the ability to instantly dump 90% of the power by simply rolling the thumbs back! This is extremely useful in all power kiting conditions.

In 2007, we introduced the incredibly popular B-Series. Built in the same 1.5 size class as our SLE and EXP, the B-Series incorporated some of the new advantages to recreational fliers such as the ability to adjust tuning for personal taste, and multiple frames to both expand the kite’s wind range and provide the right amount of competition quality precision.

In 2009, award-winning kitemaker Bazzer Poulter joined in our design efforts with the B-Series PRO – utilizing premium PC31 Icarex fabric, added reinforcements and custom colors for every sail panel. The PRO series went on to become the #1 choice for competitive and hard core recreational pilots all over the world.

Continuing to innovate in 2010, Bazzer Poulter worked closely with his iQuad teammates to develop the B-Series Zen. This design utilized a larger sail area, special bridle and framing for extreme ultralight conditions.

Thank you again for all your interest and support over the years. We couldn’t do it without you. I hope kites has brought you as much fun and enjoyment over the years as it has us.